Fun Times in the Bumbo!!

Gray and I had lots of fun today! Steve is in California this whole week for work -- so I've had to get pretty creative with things to do to keep us entertained. I've been experimenting a lot with the foods I feed Grayson, and re-trying a lot of foods he hasn't liked before. Today we re-tried peas and scrambled eggs -- and he actually ate them! I've tried the eggs SO many times -- because seriously, isn't that an automatic kid-favorite?? I was so excited, I had to take pictures to prove it. He ate a whole egg, and I was very pleased! Also, this is his new bib -- I really like it! It has a nifty little pouch at the bottom to catch all the food he drops -- which HE likes cuz then he just picks it back up out of the pouch! The regular straight bibs just let everything roll down them and onto his lap. Yuck. So I love that there is less mess with this one! I also got a placemat just like this, too -- same material, same pouch that hangs off the end of the table -- I took it out to eat the other night and it was so nice to not have to worry about wiping down the table with Lysol wipes, or trying to make him keep his plate on the table. I just suction-cupped (is that a word? Is now!) the mat to the table and put his food right on top of it, and he liked it! Me, too! Good purchases, I'm quite pleased! (The bib and mat are from onestepahead.com -- I love that site) 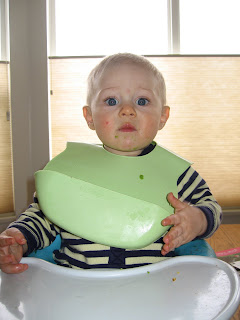 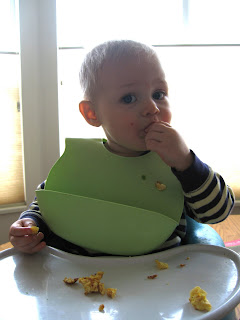 Then we played with markers for the first time! I bought these specially-shaped toddler markers on clearance at Walmart a while ago, and I was excited to break them out! He kinda didn't know what to do with them at first, but then he got the hang of it! He liked to spin them around more than he liked to draw with them, though. And he ended up getting more marker on his hands and shirt than he did on the paper. But it was fun, and it kept us both entertained for a good 20 minutes! :) (also, check out all the bumps, bruises, and scrapes on his face in this first pic -- he is SUCH a boy!) 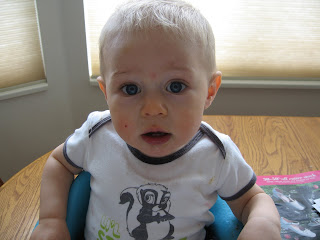 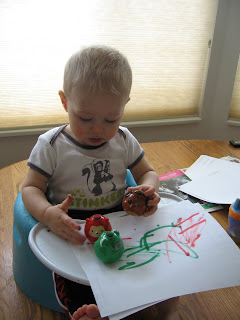 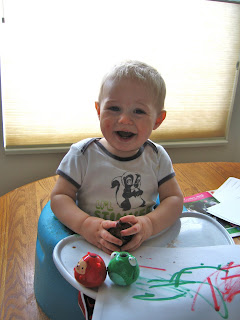 Those markers are awesome! How do get him to stay in his bumbo?? We gave up on the bumbo months ago! Rockwell flings himself backwards and arches his back so he can tip it over!

but who eats peas with their eggs ???

He's such a stud muffin with that haircut! What a cute little dude. Those swimsuits are darling.. I like the blue polka-dot and yellow.
It sounds like you and Gray had fun times!

Wow, you are such a fun mom! You are going to have to give me some ideas when Jackson is old enough to do this stuff!