Steve is an awesome daddy :) He took Grayson out during a moment of sunshine to teach him to ride his bike! My parents got this balance bike for Gray for Christmas in 2009, and he hasn't really learned how to ride it yet. I got him all safety-geared up, and they headed out to ride. Gray did great for his first time, and even balanced himself for brief periods. (Balance bikes are like big-kid bikes without pedals -- they just push the bike with their feet -- it supposedly teaches them how to balance on a bike faster)  Steve was such a patient teacher and loved every second.  I loved watching them, but I had to hide most of the time -- Gray would yell at me to get back inside if he saw me. What a goof.  Such a precious memory :) 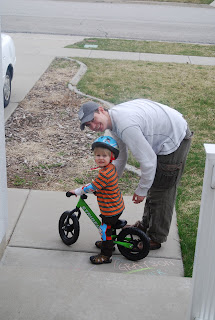 Happy Saint Patrick's Day! I'm not a huge celebrator of this day, (I'm Dutch, not Irish). But we did a few things.  I tried to color Grayson's milk green, but he freaked out about it, so there was no coloring of his food. The boy doesn't like anything unexpected.  We all wore green; both boys ended up getting two different green outfits for the day (I'll spare you the icky details).


Aaaaand that's about it.  We're boring, I know.  No cute little leprechaun feet or gold glitter all over the house.  No treasure hunt for a pot of gold.  I'm a boring mom.
Posted by Samantha at 12:19 AM 4 comments: 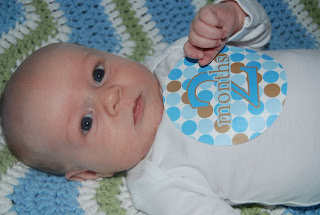 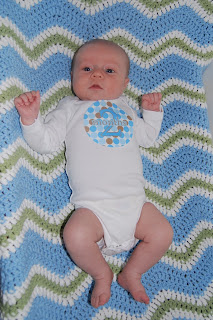 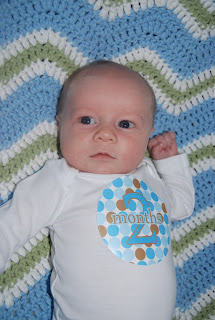 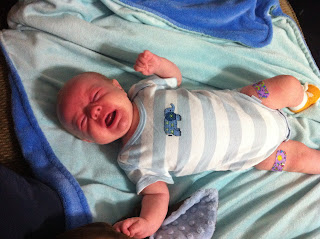 Baby T is 2 months old! He is 11 lbs (WHAT?!) and 23.5 inches long. He's almost DOUBLED his birth weight! Crazy growth-spurt there.  He's still on the skinny side of the growth chart, though, and quite long for his age -- tall and skinny like his bro and dad.  He had his 2 month check-up today, and got his shots -- he was a champ at first, and just did his usual "LA!" of protest, but when he woke up from his nap, he screamed bloody murder for a long time (have YOU every had three shots in one day? One of them a tetanus shot? I don't blame him). Poor little guy. Thatcher NEVER cries, so this was quite the deviation from normal -- it was so hard for me to listen to him scream like that!
Anyway, he is growing so well, eating so well, and looks good and healthy! He smiles all the time now, is starting to coo (LOVE!), holds his head up for a long time by himself, supports himself surprisingly well on his feet, and..........ready for this?!...........he already rolls over.  From front to back.  The first few times, I thought it was a fluke, but he does it CONSISTENTLY every single time I put him on his tummy.  He even did it today for Dr. Strasser, and she was shocked. She said "Yep. He can roll over!" and laughed.  He throws his head to the side, then wiggles and throws his feet over til he's completely on his back. Here's a video if you don't believe me:
(sorry about the shaky camera -- I had a toddler jumping on my back)

I love this little sweet heart! He is so laid-back and chill -- something we need around here ;)
Posted by Samantha at 11:28 PM 4 comments:

Grayson turned 3 on the 25th! I can't believe he's 3 already! It doesn't seem like that long ago he was Thatcher's size! :)

We had a little pizza party with our family (Gray doesn't like big crowds) -- it was a blast!

Grayson is quite the energetic little guy. He is always, ALWAYS moving -- running mostly. He is so fun!

He is very smart -- he knows his ABC's, basic shapes, and can count to 16 on his own (20 with help). He can even do some basic addition. He loves to name animals that go along with the letters, too ("A is for Alligator! B is for Bear! C is for Cow!" etc -- he has multiple animals for every letter).  He is very close to being able to spell his name on his own.

He also knows the names of quite a few dinosaurs (his favorites are Triceratops, Cretoxyrhina, and Tyrannosaurus Rex) and can correct you if you call one by the wrong name. He is all boy, and loves dinos, cars, trains, and animals.

He likes to sing the ABC song (which he inexplicably always ends with "Next time won't you sing with me....and a duck." ??? ) and also loves Twinkle, Twinkle Little Star and Jesus Wants Me For a Sunbeam. He frequently substitutes these songs for whatever you're singing at the moment (it's pretty funny to hear the ABC song while you're singing the hymn in church).

Gray is still a very picky eater, and mostly just eats pizza, chicken nuggets, fries, peanut butter sandwiches, waffles, and french toast.  He IS starting to branch out a bit, though, and will mostly at least try one bite of something. He of course loves sweets like muffins (especially poppy seed -- or "polka dot muffins" as he calls them), chocolate, ice cream, cookies, and candy. And salty snacks like Nacho Doritos, popcorn, and pretzel sticks. We're working on getting in more veggies and fruits (mostly I have to sneak them into other foods he likes). Thank goodness for Instant Breakfast (we call it chocolate milk) -- otherwise he probably wouldn't get many nutrients.

We're working on potty training (ugggh), but so far we're not having too much luck. But that adventure deserves it's own post. We're hoping to have him trained by the time he starts preschool in the fall.

Gray has an amazing memory, and can recite lines from movies after watching them once or twice. Even if he hasn't seen it for months.He also remembers things after asking just once.

Gray loves his new baby brother, and is very sweet with him. When Thatcher cries, Gray yells "I'm coming, Baby Fatcher!" and runs to see what he can do for him.  The other day, when it took me a minute before I got to T, I walked in to see Gray placing his beloved Ellie elephant on T's chest and saying "Here, Fatcher.  You hold Ellie, all better."  That's a huge deal -- Ellie is his lovey, and the one toy he will NOT share. It was quite tender.

Another tender moment was when he received his first father's blessing from his daddy at FHE the Monday after his birthday. We talked about the priesthood and what blessings are. Steve gave me a blessing first to show him how it was done, and then we asked him if he wanted one. He said "Want one!" and climbed right up on to the chair, folded his arms, and sat quietly for the entire blessing.  It was a miracle! The boy never EVER sits still! When it was over, Gray gave Steve a kiss and said "Thank you, Daddy."  It was a beautiful blessing, and a memory to cherish forever.

Gray is definitely his own little person, and we LOVE having him in our family. We love you, Little Mister!!
Posted by Samantha at 9:39 PM 2 comments: