Steve, Gray and I just went to the Dinosaur Park with Sarah, Rowan, my mom, and my dad! Grayson was so excited, and loved every minute! Here are some (okay, a LOT) of pictures: 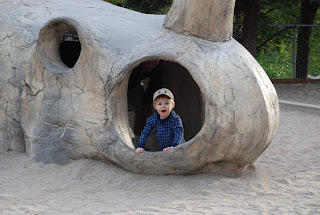 Thanks, Mom and Dad for the fun trip to the Dinosaur Park! Gray is already asking to go back again! :D
Posted by Samantha at 9:51 PM 3 comments:

Last night, we went out to the Hansen Farm and got some pumpkins!! My mom, sister Sarah, and nephew Rowan came, too! The little boys LOVED all the pumpkins, and were running and screaming and dancing -- so cute! For some reason, Grayson kept saying "Punkins! Chickens!" -- and I have NO idea where the 'chickens' part came from. There was one tiny bird feather he found on a pumpkin, so maybe that's it. Here are some pictures from our adventure: 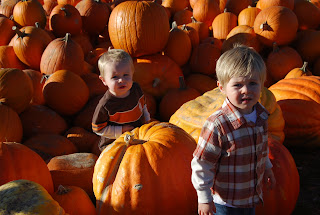 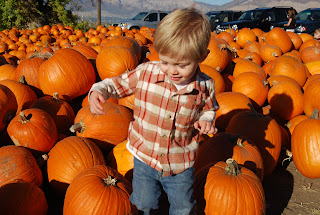 Thanks, Katie, for hooking us up! We had so much fun! Gray is still talking about it!!
Posted by Samantha at 10:26 AM 1 comment:

I have nothing to blog about. I've been terrible at taking pictures, and I dislike posting without pictures. So boring. But here's what we've all been up to lately.

Grayson:
Gray is a very busy, energetic, fun, funny, opinionated little boy. He keeps me on my toes for sure. Right now he is very into playing with trains, watching Sesame Street, and climbing anything and everything he sees. He climbs his changing table. He climbs his bookcase. He tries to climb on the windowsill. Couches. Tables. Chairs. If Steve is crouched on the ground, Gray will climb on his back. If Oliver is lying down anywhere within reach, Gray climbs all over him. Luckily, he's pretty cautious in his climbing, and he hasn't fallen yet. But it scares his mother to death. I always have visions of broken limbs, concussions, knocked-out teeth, etc. *sigh* Such a BOY. We've been having a great time taking advantage of the unseasonably warm weather, and have been spending most of our time outside, which is where Gray is the happiest. He's starting to use more and more words -- and his sentences are more fully-formed, if not completely understandable. He repeats everything he hears, which is fun. He's a little sponge that absorbs everything! Even while he was playing while Steve and I were watching General Conference, every once in a while he'd repeat something they said. He's always paying attention, this one.

Steve:
Steve is working very hard at Autoliv. He has too many projects to keep up with, and is constantly asked to help with more. He is very much in-demand. Right now he has the Autoliv plants in Japan and China competing for which one of them gets to have him first. He's doing quite a bit of travelling lately, and will probably go to India again soon. He's also still going to school, but this semester he's only doing one class, twice a week. So between school and work, he's gone quite a bit. We miss him, but we're very grateful that he is so valuable and in-demand. And when he IS home, he always makes time to help his wife, play with his son, and play Halo. :)

Samantha:
Just busy being a Momma! Keeping up with Grayson is a full-time job for sure! When I'm not chasing him, trying to get him to eat, cleaning up his messes, etc etc -- I try to clean the house, though it feels like I am losing that battle. I try to rest when I can, as my doctor advised me to do, but it's hard to do. I do lie down while Gray naps, and try to lie down soon after he goes to bed at night, too. I've been crocheting quite a bit, too -- but I can only do it after Gray's in bed, so it's slow-going. I'm trying to make as many Christmas presents as possible, and I'm maybe 1/2-way done. Yeah, I'm not very exciting. The most exciting thing about me is baby in my belly:

Baby #2:
So far, everything is going great with the littlest Wayment. He's growing well, and I'm finally back at my pre-pregnancy weight (I was losing weight before -- weird), and it's getting hard to bend over. He is VERY active, and Steve is very excited that he can feel the little guy kick now. He loves music, and moves a LOT when there's a good beat going. He's also learning early to stand up for himself. As previously mentioned, Gray is a climber, and his preggo momma is not exempt from being climbed upon. When a stray Grayson elbow/foot/knee inevitably finds its way into my stomach, Baby will kick right back quite enthusiastically.
This pregnancy is so far much less eventful than my first. I've been feeling great for the most part -- just the usual complaints of heartburn, ligament pain, headaches, exhaustion. I have occasional contractions and pressure pain, but the doctor isn't worried about them (yet), so I'm hopeful that maybe I'll get away with no bedrest (yet). I'm 26 weeks now (6 1/2 months), and I went on bedrest with Gray at 28 weeks, so we'll see.
Baby Boy still doesn't have a set name. Boy names are SO HARD! It seems like I change my mind daily. We know for sure that we want his middle name to be Arie (after my late Grandpa Koldewyn), but the first name is posing a problem. We want it to be unique, but real (not a made-up name), and not too common. Plus it has to fit a little boy AND a grown man. HARD, I tell you. Our short-list consists of: Merrick, Asher, Archer, Bram, Abrahm, Callan, Thatcher, Callum, Cohen, Dean, Carver, or maybe just having his FIRST name be Arie. We also like Liam, Lucas, Eli, and William, but those seem to fall into the "too common" category -- we just know too many boys by those names. I ask Grayson what his baby brother's name should be, and he usually says something like "Elmo" or "Thomas". Sorry, little guy, those aren't options (I actually like Thomas, but it doesn't go well with Wayment -- the 'sway' sound they make when said together doesn't work for me). When we tell him the names we like, he usually says "Baby broder Archer!" or "Merrick! Merrick!" so I guess those are his picks. And he pronounces "Thatcher" as "Fatcher", so that may be a deterrent... We'll see :)
Posted by Samantha at 9:14 AM 1 comment: