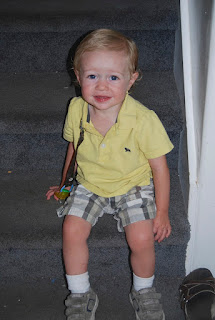 This sweet little guy is already 18 months old! I can't believe he's this big already. He's just this little PERSON now! He is so darn fun!! Here's a little about him at this stage:
Thatcher LOVES balls -- they're his favorite toys. He's really good at throwing and kicking, too -- better than Grayson! He also loves bubbles and cars.
T talks up a storm now -- he has the sweetest little voice -- everything he says is the cutest thing you've ever heard. He has a fantastic vocabulary, and can usually make his needs known quite clearly (between words and signing).  He even speaks in sentences -- "Want more juice, pwease".
His favorite foods right now are goldfish crackers, apples, string cheese, and pretty much anything he sees on someone else's plate. He's a fabulous eater and eats almost everything he's given -- the exact opposite of his brother :) You'd never know it by looking at him (skinny boy!), but he loves to eat.
He thinks he needs to do everything Grayson does -- if Gray is doing something/getting into something, you can usually find T right behind him. Climbing, running, dancing, jumping, throwing, etc etc etc.  He thinks he's a big boy and can do everything his big brother does.
He loves Baby Signing Time, and frequently signs for and says "Baby Time, pwease"
He also LOVES the TV show Blue's Clues -- he asks for "Boos Coos" every day -- he "signs" for it, too -- opens and closes his hands like they do in the show.  He knows all the songs and tries to sing along, too.  It's very cute.
He has successfully transitioned to sleeping in his own crib. He shares a room with Grayson. He's mostly weaned now, but he's not giving up his before-bed nursing session. Which is fine by me -- I love the snuggle time :)
He loves his binky blankets -- he has two -- and needs both of them to sleep. He calls them his "dee-dee"s
T loves a little toy we have that plays the alphabet song -- he sometimes goes around the house singing "Y an' Zeeeee".  It's adorable.
He has the best little laugh -- this deep belly-laugh that makes everyone that hears it smile.
He's pretty much the happiest, sweetest little guy ever! He is such a wonderful part of our family! We love him so very much! 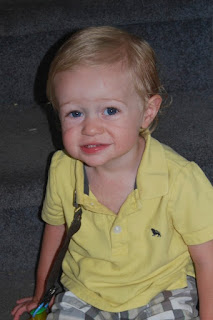 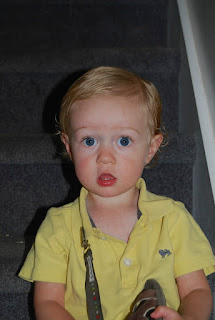 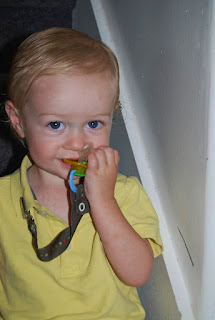 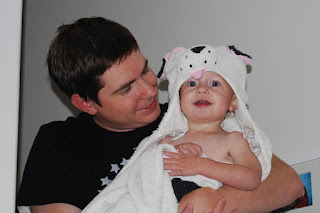 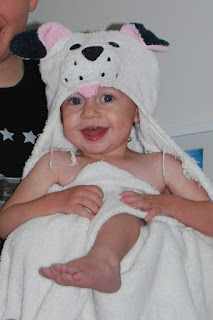