I was SO tired today. I had no energy. So I may have let Grayson have the run of the house the last few hours before his bed time. I was upstairs going through the mail, and Gray went downstairs -- usually he just plays with the video game controllers and his pony toy, but this is also where the dog bowls are. He usually heads for them, hesitates, looks up at me, sees me watching, and turns around to play with something else. BUT this time I was not watching. I was being lazy. So of course he took the opportunity to go at it. I first heard him splashing in the water dish. I half-heartedly said "Grayson. You know you're not supposed to play in Ollie's dishes. Come here, please." Of course he ignored me. So I decided to ignore HIM (hehe) and let him have his fun. As long as it doesn't hurt him, it's fine, right? It was almost his bath time anyway. So I hear lots of splashing, lots of giggling. So cute. Then I hear the clinking and rustling of the dog food. More giggling. And then it goes quiet. Okay, I think to myself, I guess I better go stop him now before he chokes on the dog food, because I know he's now eating it. So I hoist myself off the floor, go downstairs, and find this: 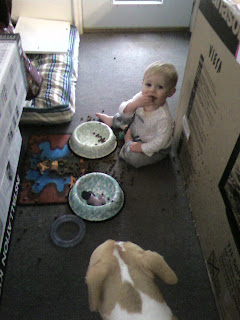 Gray was happily eating as much of the dog food as he could (of course shoving his cheeks full as soon as he heard me coming), while throwing the rest of the food everywhere around him. He had already splashed all of the water out of the bowl, but had kindly replaced the water with his favorite toy elephant. Or maybe he was trying to give the elephant a bath. I don't know which -- but it's in the water dish! And I love that Ollie is just watching him like "Hey, that's MINE!!!" And just to round out my bad mother moment, of course I took a picture with my phone before I scooped all of the dog food out of his mouth and took him up to his bath. Hey, he had fun. No one got hurt. And I was just so darn tired! I'll do better tomorrow.
Posted by Samantha at 12:40 AM

hahahahaha. I love it! So cute! Miss you guys!

OK so I'm laughing really hard right now!! He is so cute and you are the best Mother!!!

What is up with kids and dog food? Cute picture.

Yahhhh ahhaaa haha that's so dang funny! Oreos and dog food. He's getting a nice little variety of fun food experiences. I agree with Lydia, you ARE the best momma.

That is so funny! If that is being a bad mother then I must be really bad!!!

Thats so funny! What a fun little guy you have...

Oh how silly. I just love that he knows you are coming and shoves in all the dog food he can. LOL!! He has such a funny personality. I think you have many more exciting moments ahead. :)

That is awesome! I can't say it hasn't happened to me before...whoops!

I love it!!! You are not a bad mother at all! That's hilarious!

Love that baby gray is looking at you totally innocent. So cute!

That is so cute!

Maybe if you let him eat the Oreos he wouldn't go for the dog food?? JK. What a cute kid. I love the "I don't have dog food in my mouth, Mom" look that he has on his face!