Grayson and the Lobster: A Love Story

On President's Day, my mom, Grayson and I went to Tuesday Morning to do a little shopping. We went to the toy aisle, and my mom picked up the ugliest stuffed toy I have ever seen: a shiny, stringy lobster. She said, "Look at this thing!" And I said, "That is the ugliest thing I've ever seen!" (seriously -- it was!) So we look through the toys (I was shopping for b-day presents for my munchkin), and of course Grayson didn't want to stay in my arms -- with so much fun stuff to look at! So I let him run amok for a bit (yes, I'm one of THOSE moms). He pulled all the puzzles off the shelf, climbed on the shelves, carried boxes around, and then: DA DA-DA DAAAAAA!!! He discovered the stuffed toy area, and thus, the lobster. His eyes got big. He did an excited little hop. And snatched that lobster right up. And never let go. He carried that stupid, ugly thing around the store. He'd toddle around to see other toys, put the lobster right next to him, play with the new toy, and when he was done, pick the lobster back up and keep going. He would NOT let it go -- he screamed at me when I tried to take it away from him. So I bought it for him. We now own the ugliest toy ever made. And Grayson STILL loves that stupid thing. He carries it around the house with him. He tries to take it to bed with him. He tries to take it with him to church. The boy will not let it out of his sight for long. It's hilarious! I guess you can't pick what your child gets attached to!! Really, he's got SO many adorable stuffed animals that I love -- and he has to get attached to THIS thing!! Here are some adorable pictures of the two little best buddies! :) 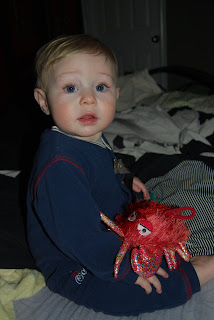 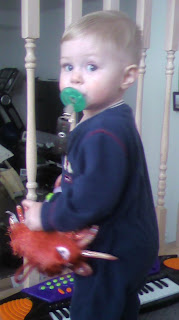 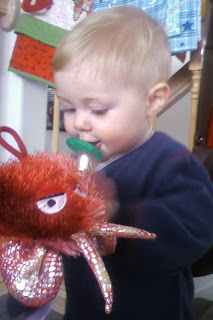 oh my heck that is hysterical! that is quite an ugly little toy. LOL. :)

Oh I love it. That is hilarious!!!

That really was so funny ! and I might add that Sam was a "good mommy" and cleaned up the messes Gray left along his way in the aisles. Who makes toys like this - and who would buy it ? I said - - now we know ! teehee - love you Gray

Kids do the darndest things...That toy is pretty ugly!!!