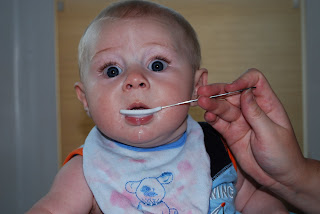 We finally 'gave in' and gave baby Gray some rice cereal. I've been planning to not give him any kind of food until he's 6 months old (AAP says it's best to exclusively breastfeed until 6 months), BUT he's 5 1/2 months (close enough, right?!) and he's just so darn interested in everyone else's food! So I figured we'd at least try a little! He was quite funny with it -- he'd take it okay, and then just sort of play with it with his tongue! Silly boy! But he didn't really spit any out, so there's hope! 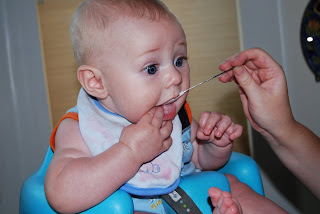 Okay, don't look at me in this next picture -- utterly hideous! -- but look how cute Grayson is -- look at those cheeks!! hehe (his leg looks broken or something, doesn't it?! What a weird angle......) 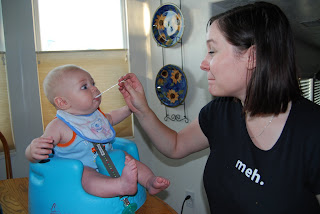 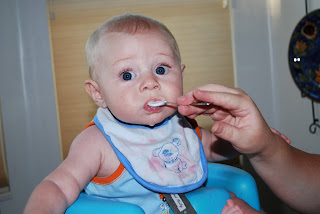 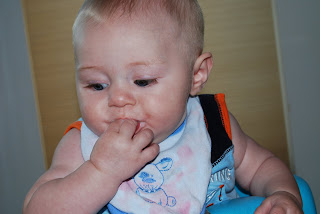 He didn't really eat much, and he won't eat the cereal if he's hungry, but I think I'm calling it a success! I can't really imagine it's all that tasty, but who knows. I'm not trying it out! But yay for my big boy for trying new things :) !!
Posted by Samantha at 9:50 AM

I think it is so funny how when we feed our kids, we move our mouths at the same time! weird. He is so cute. I just decided that we need to get together with our kids sometime soon. Maybe a picnic lunch at a park or something? what do you think?

yum yummy. I bet he'll just love all those new flavors. The mess has begun.

Aww. I swore I was going to wait until Lincoln was 6 months. Then he hit 4 months and was constantly starving and I gave in. But, he was already almost 20 lbs and I really couldn't keep up with that.

I gave in as well and fed Maddux early. He was WAY too interested in food and I figured I'd better give him baby food before he began stealing OUR food!

Oh yay Gray! My friend Tammy just pureed a whole bunch of fruits (scored at the farmers market) ~ and it sounds like she's set for life for baby food!