A New Year, A New Grayson

On January 2nd, Grayson got his teeth capped.  He broke his two front teeth while he was learning to walk, and they've been okay until now -- the last time we took him to the dentist he said the teeth were finally dying, and were worn down to the nerve.  So we said goodbye to Gray's "shark teeth" (as he called them), and got some new "square teeth" (as he calls them now!) 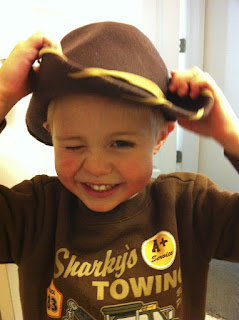 He was cute before, but now he's just downright handsome! He loves his new teeth, and is happy to show them off to everyone.  I've even seen him biting food with his front teeth, which he's never done before. I'm so glad we did it!
Posted by Samantha at 11:46 PM