We had a pretty fun, laid-back Halloween. We went to Autoliv's Trunk or Treat on Friday night. There were a TON of people there! It started at 5 pm -- we got there at 4:30 and had to stand in line for an HOUR before we got into the part of the parking lot where they were giving out candy! Gray did surprisingly well waiting -- he had fun watching all the other costumed kids running around. I got a little nervous watching the two brothers full-out wrestling on the grass, though -- I'm not sure I'm ready to have two little boys.... Anyway, Gray quickly got into the Trick or Treat spirit once we got to the cars, and was very nice to say "Thank You" every time he took a piece of candy. He stayed very far away from everyone in masks or anyone who looked scary. I thought he'd have been super excited about the real live fire truck, but he was in the candy zone and only paused by it long enough to get candy from the firemen and thank them -- then he was off to the next car! Here are the only pictures I got of him in his costume: 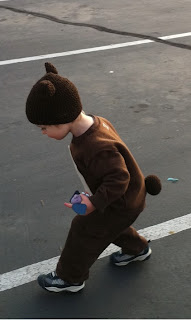 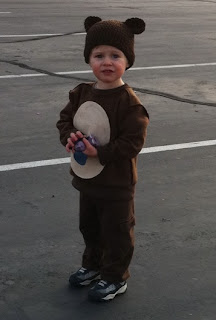 He is getting so hard to photograph! It's impossible to get a good picture of this kid, I swear! Anyway, he's a little teddy bear, because the lion costume I spent FOREVER making (of course) got rejected because Gray wouldn't keep the hat on (it came all the way down his head with a mane around his face -- he didn't like that, and wouldn't keep it on). Thank goodness I made the hat and tail big enough that (hopefully) he can wear it next year.  So last-minute, I crocheted this bear hat and a little bear tail, stuck some felt on a sweatshirt, and called it good.  It's good for a two-year-old, right?!?! :)
On Saturday, we went to my mom's ward's Trunk-Or-Treat, and it was raining. Blah. I gave it a good go, seeing as how Grayson had so much fun the day before, but he was wet and cold, and kept saying "Go bye-bye in car?", so we got 6 pieces of candy, a cookie, and a hot dog before we gave up and left. He didn't seem disappointed at all, and we had a fun night just hanging out at Nana's house! She dressed up as a witch, and he was wary of her at first, but in the end thought she was great (he's still asking for "Nanny Witch!").Gray also decided that every time she gave candy to the trick-or-treaters, HE got to pick out a piece, too. He ended up with quite the candy stash :) At least he told her "Thank You, Nanny!" every time. He even got his own special treat of a pumpkin Pez dispenser -- he loves Pez!
﻿ ﻿
Of course, the best part of having a two-year-old at Halloween is that you can totally raid their candy stash, and they never know it!!! I've eaten every single piece of chocolate in his bag. Not even gonna lie. He doesn't miss them. :) And I figure his little brother needs some Halloween candy, too!!! Right?! ;)
Posted by Samantha at 11:11 PM

Yeah we've been quite fond of Halloween candy and pumpkin cookies around here lately. Row got the hang of trick-or-treating pretty quick too!