I finally gave in and converted Grayson's crib to a toddler bed. I've been hesitant to do it, because he's always been content in his crib, and it's so convenient to be able to corral him at night! :D But we decided it was time when Grayson surprised Steve by walking into the family room when he was supposed to be napping -- he had climbed out of his crib without making a sound! It's the first time he's done it, but he did it very well!! So that night I put the toddler rail on. Grayson was SO excited, and immediately climbed right up into bed and started jumping and rolling around. He kept saying "Bed! Bed! Bed!" -- he knows it's a big boy bed now instead of a crib! Luckily we have a baby gate installed in his doorway, so I was able to shut the gate to keep him contained to his room, but of course he took the opportunity to play with everything in his room and make a huge mess :) It takes him a bit longer to go to sleep now, but he's happy with his new-found freedom, and I'm not worried about him falling out of his crib. Although I AM a bit worried about him climbing other things -- I've discovered toys on the floor that were up high on shelves the night before -- so he's been climbing his bookcase and his changing table. I'm always in the next room, and both our doors are open, so I've never heard him fall or bang around a lot, so he's obviously very good at it -- it just worries me a bit. I've stopped putting the toys up on the shelves, hoping this will negate the need to climb. Also, to my surprise, Grayson has always ended up back in his bed to sleep -- he doesn't just pass out on the floor, he'll climb into bed when he's tired. 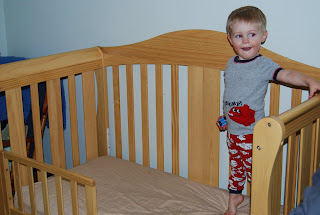 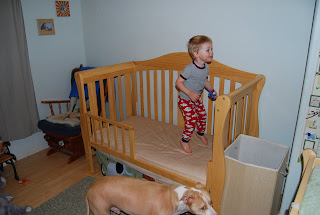 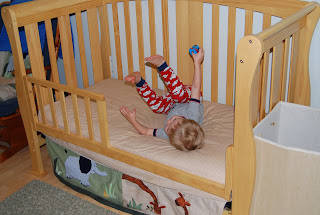 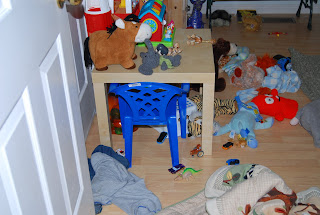 The evidence of the destruction :) 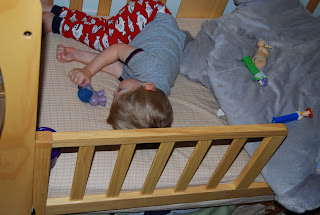 ah cute! And I love that new picture of him as your header. What a darling Grayson!!!

Such a BIG BOY ! Good Job Grayson ! love the big ele pillow thing or whatever it is in the bed w/him !