What Does a Panda Say? 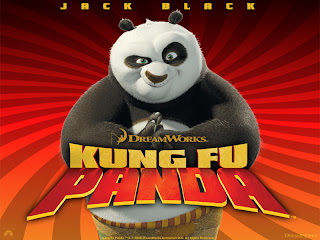 Gray LOVES animals, and animal sounds. To keep him entertained during diaper changes, waiting in lines, etc., we often play the animal sounds game. I ask him what the animal says, and he tells me -- pretty simple. Sometimes, I say an animal that he doesn't know the sound to, and he promptly makes up an answer. Past answers have included giraffes say "raff", hippos say "HIP-po!", and zebras say "bra-bra" Here's the made-up answer of the day:

What a smart little guy!

I love that movie. Very cute...

I haven't checked your blog in a while and can't believe how big Grayson is - he is SO stinkin cute!!!

hahahhaa!! So so cute. Mom that's funny that you posted as me. How did you sign in with my password and all? :)