Yesterday was Steve's 28th birthday! (I have to put the number, because I tease him every day that he never knows how old he is -- "How old are you, Steve-o?" "Uh................." "28, baby. You're 28." hehe) He celebrated by going to work, and having meetings all day long. Sounds fun, huh! While he was gone, Gray and I decorated a cake for him! Steve loves funfetti cupcakes, and he loves turtles, so we made a turtle cake out of funfetti cupcakes!!! :D Gray helped by picking out all the orange M&M's (and all the blue ones -- they're his favorite -- but all of those got eaten -- barely managed to keep two for the eyes). 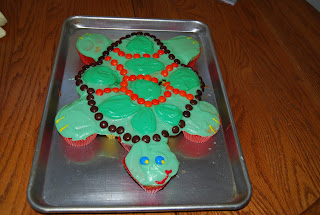 I didn't take any pictures of Steve, but here is one of Gray enjoying one of the cupcakes (ate the M&M's first, then ate all the frosting, then the cake) 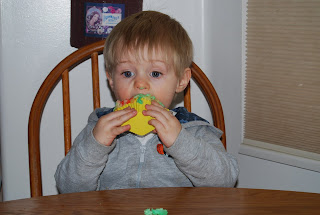 Steve got some cologne from me (he's been wearing Polo Sport since high school -- I thought it was time for a change!!) -- I LOOOOVE the scent and I just have to nuzzle his neck now when he wears it. He also got a Superman graphic novel from Grayson, and he is very excited about that. And a subscription to Wired magazine from Ollie -- also excited about that!

I made Steve's favorite foods for dinner (lemon apricot chicken, fried rice, and green beans). Then Steve played Final Fantasy for a while (I told him he could do anything he wanted), then we watched some TV and snuggled! Steve said it was a good birthday, and he had fun. We're going out to dinner with his family tomorrow, and hopefully we'll go out together on Saturday to a movie or something.

I love you, Steve-o! Happy happy birthday to you!!
Posted by Samantha at 10:15 PM

Happy bday Steve. I had a good Steve bday I had my gallbladder out. I can't believe you are 28 your old :)
happy bday. Love you guys.