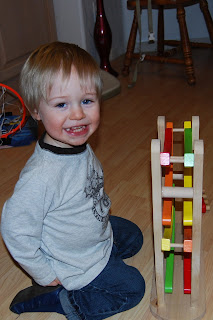 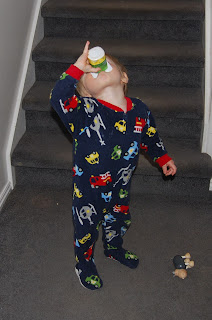 (The yogurt junkie)
Grayson had his 2 year check-up with his doctor today. He is just over 28 lbs (in the 53%), and is just over 34 inches tall (43%). So he's just about exactly average! It's good to hear that he's healthy and growing as he should! Especially with his picky eating habits :)
Gray has a very limited amount of foods he will eat. No matter how much I try to make him branch out, he sticks to the same things! He'll eat pizza, spaghetti, chicken nuggets(sometimes), pb & honey sandwiches, cereal, and yogurt. And anything sweet, of course -- he is constantly asking for cookies, treats, 'nums' (M&Ms), and ice cream (he says 'ice keem' now instead of just 'ice'). So I have resorted to sneaking healthy things in with his favorites -- spinach/carrots/squash etc pureed and mixed in with his pasta/pizza sauce, etc. And since he asks for ice cream every morning for breakfast, I freeze his baby yogurt, and call it ice cream when I give it to him :) And the list of what he'll eat is getting smaller! He all the sudden won't touch a few things that he USED to LOVE! So frustrating. For example: He used to LOVE peaches and bananas. Now, he won't eat a single bite. And FORGET about trying to get him to eat veggies -- which he also used to love! (well, green beans, corn, and peas at least).
Grayson is well in the midst of his terrible-twos. He thinks he has to SCREAM every time he needs something/doesn't get what he wants/gets frustrated/he blinks......etc. We are working on it, and I am trying to be strong and not give in to him. I think he is just starting to grasp that I really am serious about the time-out thing :) and will sometimes stop screaming/whining the first time I warn him (he gets two warnings before a time-out).
He really is a very very sweet child, and is very tender-hearted. Where most kids laugh at physical comedy on TV (a character getting hit, falling down, etc), Grayson gets concerned and has to ask if they're okay. It's cute, but you have to be careful what you watch -- he can get VERY upset if he thinks someone actually got hurt.
Gray is also very affectionate -- loves to give hugs and kisses, which I LOVE :) That is, if you can capture him in the midst of all the running amok. He loves running, jumping, and climbing, and barely ever pauses for anything (I have to chase him around shoving food in his mouth most meals).
He still loves everything animals, and everything cars. He can count to 12 by himself, knows all the colors of the rainbow, knows most the letters of the alphabet (just not in order quite yet), and talks in sentences. It totally baffles me how big he is all the sudden :) I'm sad he's not my baby anymore!!! But I think this age is the most FUN of all!!! Even with the tantrums :) It is SO much fun to see him learn new things every day -- and hear the new words he can say, or the old words he can say more clearly now.
I love every day I get to spend with this little stinker. Which is literally every single day :)
Love you, buddy!!
Posted by Samantha at 11:06 PM