Grayson's hair has been getting out of control! He's terrified of getting his hair cut, so he hasn't had one in a YEAR! His hair was constantly in his face, and always looked all scraggly. So I gave in and made him an appointment at Cookie Cutters. I made Steve take him, because I'm a chicken, and didn't think I could stand the inevitable screaming/crying/trembling that would accompany his hair cut. Steve was such a good sport to take him and endure it all! From what he tells me, the lady cutting his hair did NOTHING to make Gray more comfortable, wouldn't let him sit in the airplane like he wanted to, and didn't even ask what his name was. I'm not too happy -- we shelled out the cash for what I thought would be a better experience for him -- these people are supposed to be trained specifically FOR that purpose right?! Anyway, he DID get the hair cut, and I LOVE it! He looks like a totally different boy! Case in point:
BEFORE: 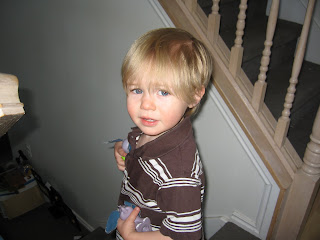 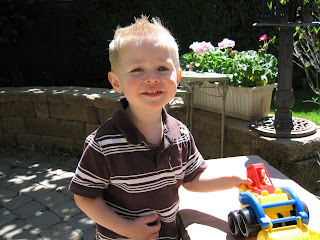 He looks so handsome! And like such a big boy!!! :D I suppose it was worth it to get it done, and for the fact that I wasn't the one to inflict the horror. And he got a balloon, which he is ecstatic about. Ah well. Maybe next time we'll just specifically request not to have that particular gal again.
Posted by Samantha at 12:48 PM

He is such a cute little guy ! Love the "new" look - - - and Steve you are such a trooper ! I know it was harder on you than Gray really - what a great daddy tho to tough it out for him. LOVE you ALL !

CUTE!! I love how he's wearing the same shirt. He looks quite handsome... oh if only hair didn't have to grow so fast!

Very very cute!! That's crappy that he didn't have a good experience with Cookie Cutters. Just fyi, if you sign up for their emailing list, they'll email you a $3 off coupon.