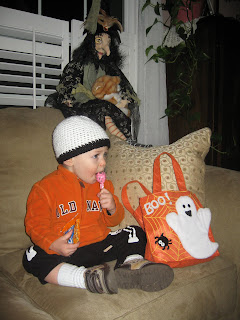 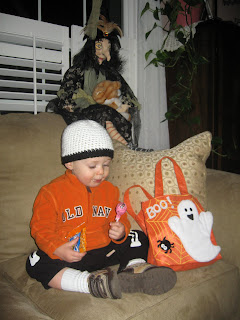 I'm a little late posting this, but we had a great Halloween! We had dinner at my mom's house, then my dad and I took Grayson around the block to go trick or treating for the first time! He was a bit anxious and shy -- I had to hold him the whole time. But he quickly caught on that when we knock on doors, we get candy! Every time we went up to a door, I'd tell him "Say 'Trick or treat!'" -- and he never said it -- but by the last few houses, he was whispering "Treeet!" so low that only I could hear him. And at one house, he got some M&M's, which he loves, so at the next house, he whispered "Enanen" which is how he says M&M. We ended by knocking on my mom's door, and when she came to the door with the candy bowl, Gray gave her a huge smile, and proptly began grabbing handfuls of candy and putting them in his bag. Handful after handful. Guess he was excited to know how it all works, and not have to be shy with the candy-giver! He actually got a lot of candy for just going around the block! I let him eat a packet of M&M's ( because as soon as we sat down in his Nana's house, he took them out of his bag, held them up to me and said "Help. Peease". who could resist?!), and a few other little pieces of candy. He loved it! Having kids really makes holidays so much more fun!!
Posted by Samantha at 2:53 PM

SO CUTE!!! I agree--holidays with a kid ROCK.

Love it, that little hat is too cute. So talented!!

What a cutie! I love his trick or treating bag, did you make that?