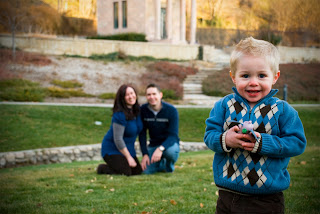 Well, I've been meaning to post some updates on Grayson for a while now -- just barely getting to it now :) Just to warn you -- it's pretty long. But it's more for my documentation than anything, so I won't feel bad if you don't read it.
Gray is 21 months old now! Holy. Cow. I seriously can't believe how big he's getting!! 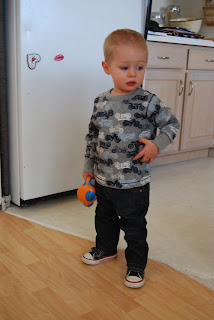 He is about 37 or so inches tall, and weighs about 25 lbs, give or take.
Gray is a very picky eater. The ONLY things he is guaranteed to eat are chocolate muffins, popcorn, pizza, ICE CREAM (his favorite-ever treat) and any kind of cookie. Not the most nutritious fare. Most of the time, he will eat PB & honey sandwiches on wheat bread, and he mostly likes spaghetti, yogurt, and chicken nuggets too -- but some days he just inexplicably refuses to eat them. 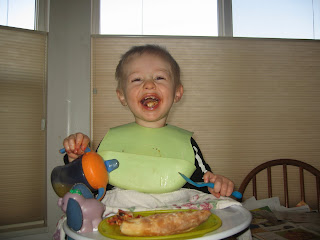 He also thinks he is too busy playing to sit down and eat, so I'm constantly chasing him around, trying to shovel food into him. It is seriously a CONSTANT battle. I literally try THREE different foods every single meal -- trying to get him to eat something different first, before falling back on his favorites. I mostly try to make up for the lack of good nutrition by giving him Instant Breakfast in his whole milk, and multi vitamins in his V-8 juice. *sigh* Any tips, tricks, suggestions??
Grayson is also the most energetic little guy I have ever met. He goes, goes, goes non-stop all day every day. He never walks anywhere -- he runs full-tilt! He climbs on everything he can, jumps off stairs/furniture/etc without any hesitation, and giggles madly while doing it all.
He is so happy and fun, and so very sweet! He is also VERY shy, and tries to hide whenever there's someone in the room he doesn't know -- and if he can't hide, he simply closes his eyes. Really. It's hilarious. So if you see Grayson anywhere, don't be offended if he runs, hides, or cries. He does this with everyone except people he sees every day. Don't take it personally.
Gray is also SO smart! And that's his newest phrase -- "I STHMART!" -- thanks Nana for teaching him that one :) It's totally true, though! He can count to 6 consistently, and most days he can count all the way up to 12. He also knows the letters A, B, C, D, E, O, T, Y, and Z by sight -- he can tell you what letter it is if he sees it! I don't know any other kid under two that can do that! :D Proud mommy :) He knows the colors blue, green, orange, purple, red, pink, and yellow, along with their signs. He knows over 100 words, and about 50 or so signs, which I love -- it makes it so much easier to understand him! He's getting a lot better about the whole "please" and "Thank you" thing -- Steve even saw him combining the signs together one day -- he signed "please" on his chin (instead of his chest), then pulled his hand away (like "thank you") -- guess he's got it down that he always says please and thank you for everything, and he thought he'd save some time :) Some times he combines "thank you" with blowing kisses too, so it's an extra-sweet thank you! He's also getting to the parroting stage, I think -- he tries very hard to repeat most everything you say to him. His Uncle JD needs to be careful around him now ;) 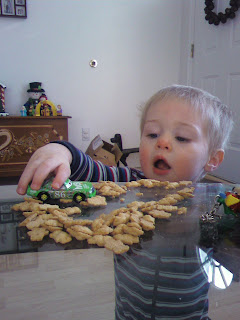 He also loves anything car- or animal-related. He knows the names of more animals than I can count. His favorites are "ele" (elephants -- of course), "HIP-PO!" (hippo), hoawse (horse), and "COW!!" (cow). It's so cute how he says them all -- my mom says he has a Boston accent. He's also starting to say his name -- usually with something that's his -- such as "Gray bed" or "Gray juice" -- but mostly he just says "MINE" -- a whooooooooole lotta "MINE". And "NO" -- always a favorite.
Gray loves to watch Baby Signing Time (he does every sign along with them), Sesame Street (his favorites are Oscar and Cookie Monster), and the movie Cars (we have to watch it almost every single day).
He loves music -- loves to dance, and sing. It's SO funny to hear him sing, because he doesn't ever sing the words to the song that's playing. He makes up his own, with a combination of "The Rainbow Song" from Signing Time ("red, o'ange, buuuuue") and Old MacDonald ("Cow, hoawse, moooooooo, ba-GAWK!") He even did this yesterday at church, while we were singing one of the hymns -- I had to bite my lip to stop from getting the giggles.
He is also unfortunately starting to figure out the whole "throwing tantrums" thing. And has stopped sleeping through the night. *sigh*. He usually wakes up at around 1am or so, and SCREAMS -- like gut-wrenching screams -- until I run in there and pick him up. He won't let me just talk to him, or rub his back. I have to pick him up and rock him in the chair. Or bring him into bed with us. Or a few nights I actually climbed INTO the crib with him. I'm not proud of it. But sometimes, when you're sleep-deprived, you do what you have to do. Oh, and then he wakes up for the day at 6 am. The boy does NOT understand the importance of sleeping past at least 7. So on those days where I can't get him back into his crib alone, I wake up with him at 1, and I stay up. So I've been going off of one or two hours of sleep most days. Thankfully, the last few nights, he's gone back to sleep on his own after just a few minutes of snuggling. Let's hope things get back to normal ASAP. 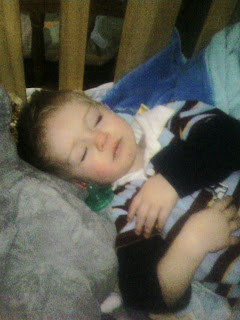 OOO! And one more piece of GREAT news! Grayson has finally outgrown his "Bebe" --his binky! He had gotten so where he just needed it for naps and bedtime, but now, even though it is still in his crib, he doesn't ever grab it anymore! I was planning on taking it away when he turned 2, but he has done it himself! Just like the breastfeeding! (He weaned HIMSELF at 14 months!) Thanks for making my life just that much easier, Graybee!
Well, I think that's about all that's going on in the life of Grayson Wayment. Boy, do I love this kid!! :D 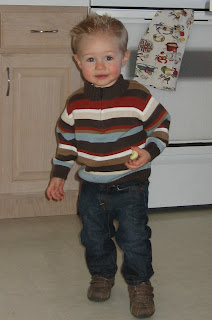 What a cutie, and you're right SO smart!!

matt is not super picky but somedays he just wont eat but he loves loves loves this vitman/nutrition suppliment my mom sells call reliv he gets all his nutrition in the morning with o.j. or milk it comes in chocolate and vanilla and that is what he always wnats;) you should ask her about it.

So cute. I think he sounds like a typical busy toddler. Dr Clawson says to give them the nutrition milk drinks in the baby eisle. They are fortified with vitamins and things they need, they are a bit pricey but the no name brand is just as good. But I always went for the ovaltene or breakfast in the milk and thats good too. I have to make smoothies for Hudson to get fruits. I sneak in spinach, all kinds of fruits and flaxseed in them, he loves them. I call milkshakes and he gobbles them up. Also you could try that cook book The picky eater or something really good tips. He's super cute.

Wow Manth it makes me sleepy thinking about you and your crazy nights. That boy's gotta sleep!! I will do my part and pray for him. :)
Such a cute post of the updates. I sure think he's SMART!!

Brylee does the same thing in the middle of the night. I also have to rock her back to sleep, what is this about? Good luck with the sleep thing I keep telling myself it has to end soon right?

Pieces of Us said...

Um so glad that I'm not the only mom who brings my kid into my bed in the middle of the night or climbs into his crib!

Grayson is so cute!