I haven't posted in a while, because there really hasn't been much to blog about. Here are some random pictures I've taken lately. Enjoy :) 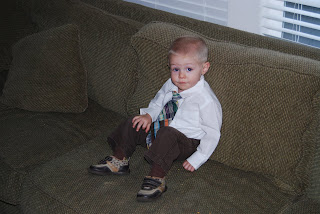 Look how BIG my little boy looks! This was last Sunday before church. He looks like a little man! :) 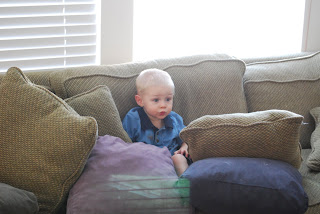 This is how Grayson watches TV lately -- he gathers up all the pillows around him, and he chews the inside of his cheeks. I have NO idea why. But it's cute. 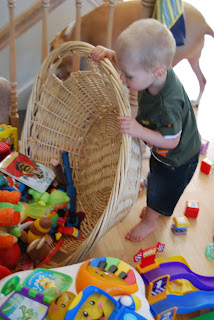 He's an expert mess-maker. He's decided it is much easier to just dump out the entire basket of toys, instead of looking for the one toy he wants. Geez. 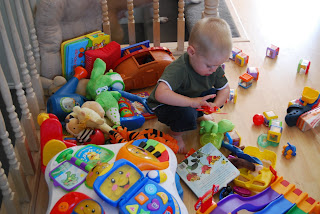 It does look pretty fun, though, huh -- being surrounded by all those brightly colored, fun toys! 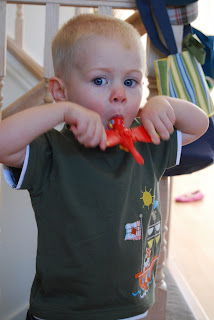 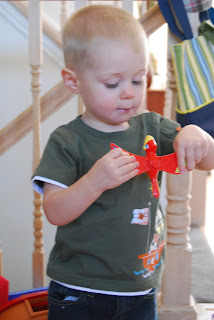 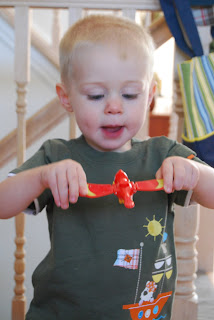 I love when I catch glimpses of his adorable dimple!! (and yes, that is a huge bruise on his forehead. *sigh*) 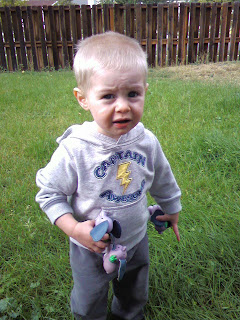 Those of you who know Grayson, know that he has one true love, and her name is Ellie. Short for Elephant, that is. Grayson is not attached to a blanket or stuffed animal, like every other child I have ever known. He is attached to a plastic elephant from his Noah's ark playset. Ellie goes everywhere with him. Well, Ellie gets misplaced sometimes, and you'd think it was the end of the world. So we bought some extras off of Ebay, and we keep them in various places so we can find them easily. Well, Gray found 3 of them the other day -- and he HAD to carry ALL THREE of them around with him all day long. It was pretty funny watching him try to pick up all three in his little hands, but he worked out a system :) 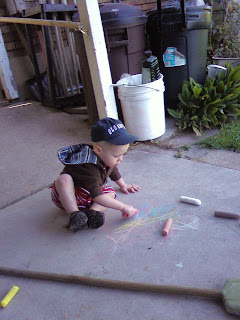 Grayson has also discovered a love for all things sidewalk chalk. He is going to be very, very sad when it gets too cold to go outside and draw with his chalk. It's fun to see him draw -- he always has a purpose in mind, too -- he always has to tell me all about his drawings when he's done. There's usually a cow involved somewhere.

Also, I just have to brag for a moment -- my 19-month-old can count to 5 all by himself :) and to 10 with some help. Okay, sometimes he skips 5 and jumps to 6, but most of the time he gets it right! He can even count backward, though he starts at a different number each time he does it. He's also working on learning his colors -- he's got blue, red, pink and purple down so far. In case you're interested, blue is his favorite color, and 8 is his favorite number :) And when he wants to go down the stairs he says "Eight, Nine!", because we always count when we go down the stairs, and we have 9 of them -- so of course it's most exciting when you get to the end. Oh goodness he's cute :)

Ok, that's enough rambling for now :) Maybe I'll have something REAL to post about soon :)
Posted by Samantha at 11:55 PM

I like posts like that! I love that you bought more Ellies on ebay. That makes me laugh. He is very cute, and believe me - his second grade teacher will be glad he can count! :)

Wow, he's getting so tall. Love the Elephants.

I LOOOOOVE posts where you talk about the funny things Grayson does. Those will be priceless someday for him to read too! :) I heard him counting down the stairs with Mom and I was so impressed.
And I love that he loves COWWWWWs so much- haha!

Oh my ! what a fun post that is - - and I love the old fashioned post paper ! We have LOVED having Gray stay w/ us - and he never ceases to amaze me w/ his imagination and how quickly he learns. LOVE HIM ! such a fun age to treasure.

He is so cute and growing so fast! Love the elephant thing. And Wow ... counting already and colors ... exciting!