Grayson and the Splash Pad

On Friday, Grayson, Steve, and I went to the South Ogden Splash Pad (it's right behind the Ogden Athletic Club parking lot) and we had a blast!! Oo -- and it's FREE! I'm all for some free entertainment!! Grayson was a bit tentative at first, as he always is with new situations/new people/big groups of people! But he warmed up to it -- especially after most of the kids left (they were there for a birthday party, and they all left at once to go eat). He spent most of his time on the outside, playing with the smaller squirters, or at the littler playground there. We stayed longer than I thought we would, because Gray was having so much fun! I guess we'll be going back soon :) 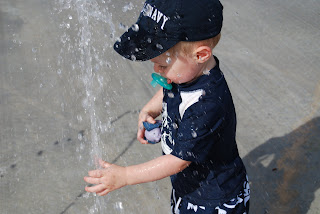 Being ever-so hesitant about the water. 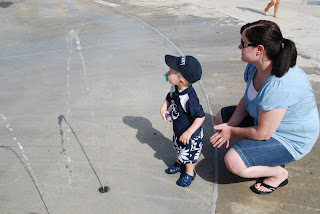 He had to stay close to me, and frequently buried his head in my lap when someone would look at him. Poor little shy guy! 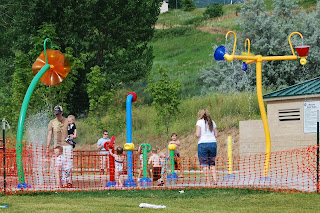 He did let his daddy carry him around and play with the bigger water features. But they were only fun if daddy was holding him. 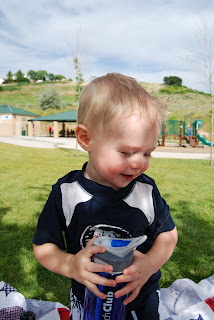 Lots of smiles that day! 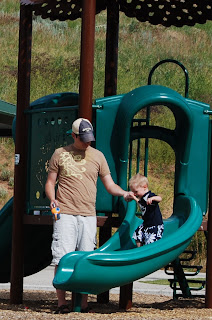 He loved walking up and down the slide! He kept saying he was "BIG!" -- with his chest puffed out, of course! 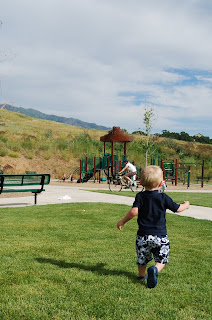 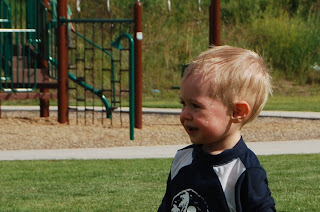 I like this picture -- you can see the water dripping off his face! :) 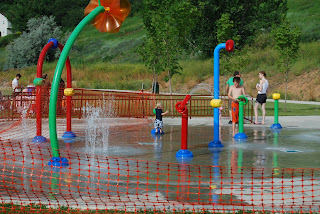 At the very end, when we were getting ready to go, he decided to get brave (this is after most of the other kids had gone), and he ventured off into the splash pad alone. He'd giggle and squeal and splash! Until he got sprayed full-on in the face! :) Oh goodness I have fun with this kid!!!
Posted by Samantha at 9:27 PM

How awesome is that? Even better that it is free. Looks like he had tons of fun. What a brave little guy, water I think is always scary for kids.

My mother in law lives right up the street from there. I really need to get down there. It looks like so much fun!

No way, I had no idea that was there!! Looks like lots o' fun. Remember last year when we went to Raging Waters and Gray was a tiny baby? Wow~ time is a flyin'. That will be fun to go again.

I'm so glad Grayson had fun! I took Max on Thursday and he HATED it. He was just ornery though. So I'm determined to take him again and hopefully it will be a better experience.

How fun! We love going to splash pads too, can't beat free entertainment!!