Gray at the Zoo! 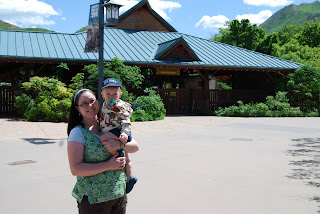 Grayson, Steve, my parents and I went to Hogle Zoo on Saturday! We had a BLAST! Gray was absolutely fascinated with the animals -- his favorites were the elephants (of course), the giraffes, the crocodiles (he made me go back to them like 20 times - and they weren't even MOVING! How did he even know they were animals?!), the monkeys, and the bears! The poor little guy got something in his eye and/or got bitten by some weird bug right when we got there, so for the first hour or two his eye was red and tearing up, and he had red spots on by his eyes! He had to have been in pain -- but he was such a trouper and was happy the whole time! He also never took a nap -- I thought he might sleep in the stroller, but of course there was way too much going on, plus he didn't spend much time in his stroller -- 4 adoring adults around that were all too happy to hold him and make him happy! :) We rode the train, (which he wasn't sure of - I THINK he liked it), and the carousel twice (didn't like the animal that went up and down, but liked the stationary one). We stayed for like 5 hours, and then he crashed in the car on the way home (after being awake for about 8 hours straight!! I'm such a bad mom!!!) What a fun day! :) 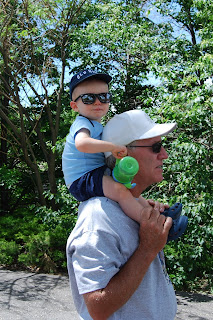 Cool dudes! Gray and his Poppa in their shades! 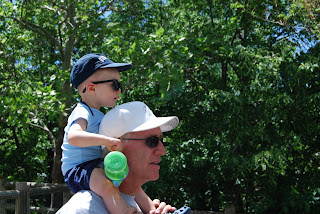 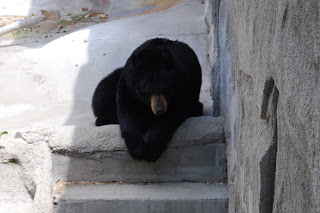 The black bear -- Gray giggled when he layed down like this -- guess it was funny. 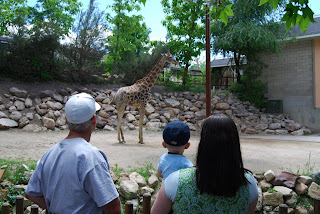 We stayed by the giraffes for a LONG time! He just stared and stared! And one of them came right up close to us and stretched his neck out to eat leaves off the tree with his long tongue! It was so funny! 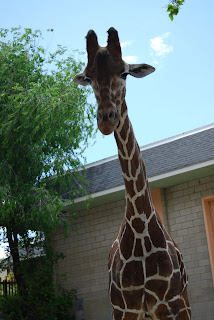 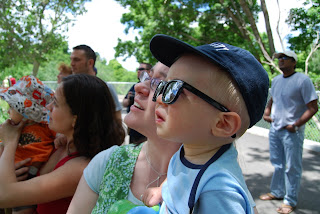 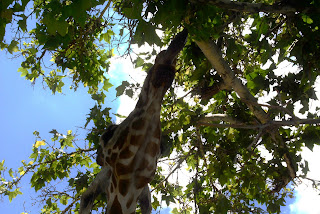 Look at that tongue!! It was so long! 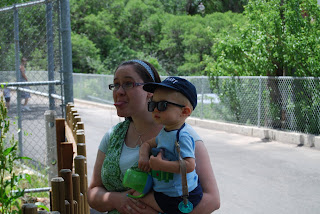 Mine's not as long. But close! 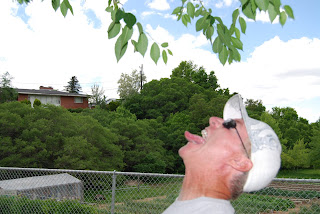 My dad thought the leaves looked tasty, too. 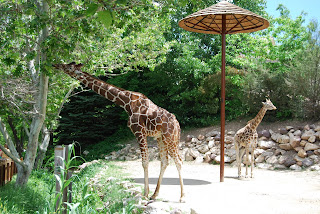 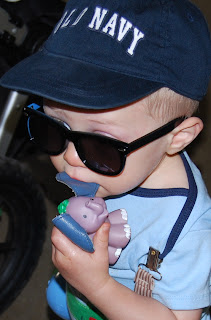 Gray felt inspired by all the leaf-eating and ate the closest thing at hand -- his elephant's ear. 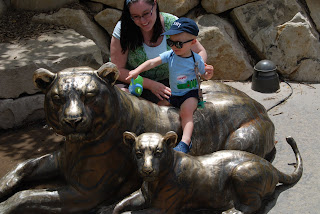 Gray loved the metal tigers -- kept saying "Maow! Maow! Maow!" over and over! 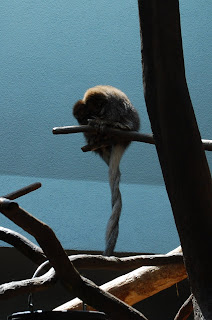 Look how cute these lemurs are! They're snuggling and have their tails wrapped together!! Awwww! Twuuuu wuuuuv!!! 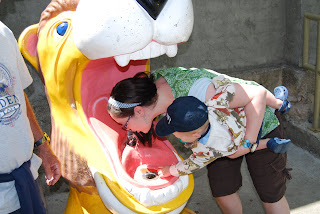 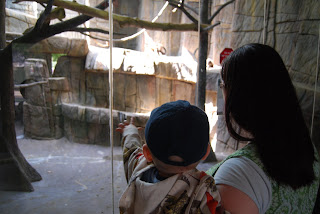 Gray trying to make me let him go get the monkeys. 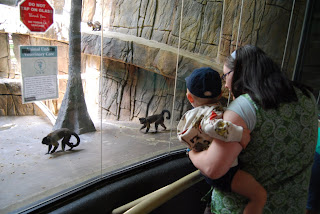 The monkeys came pretty close to us, too -- guess they thought Gray was one of them :) hahaha I'm so funny. 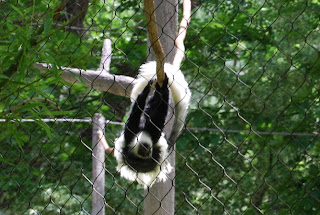 This monkey was hilarious! It kept swinging upside-down, and all it's bushy fur would puff out around it! 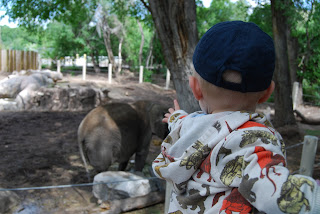 Trying to make me let him go get the elephant!! 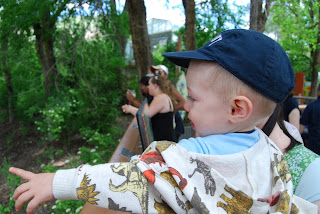 He was so excited to see the elephants! Big smiles! 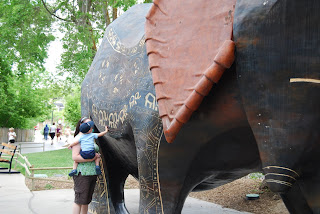 I tried to appease his urge to get the elephants by letting him touch the big elephant statue -- this thing is pretty cool! It makes funny noises and sprays water from it's trunk! Gray thought it was pretty fun. 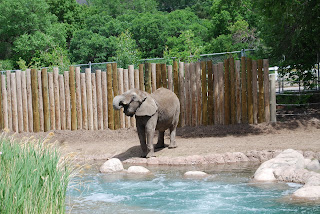 We got to watch this elephant take a drink from the pool -- it was cool to watch! Oh, and she's pregnant -- 19 months pregnant -- wow! Poor girl! We're gonna have to go back when she has her baby elephant -- I'm sure Gray would love to see it! Me too :) 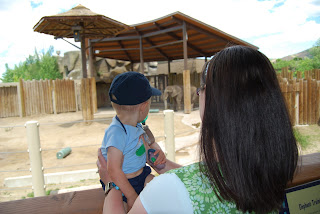 More watching the elephant -- he didn't take his eyes off it -- he'd crane his neck around everywhere we went! 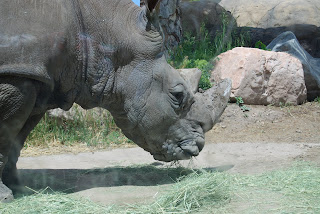 The rhino! Look at that schnoz! 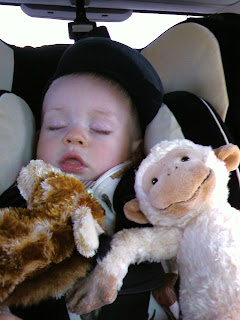 We stopped by the gift shop on the way out, and Gray picked up this giraffe right away and wouldn't put it down. So his Nana bought it for him :) And then Steve found this fun, soft monkey, gave it to Gray, and then he also wouldn't put that down!!! So his daddy bought it for him, too :) He clutched both of them, and didn't let go of them until he fell asleep in his car seat! And he's carried one or the other around with him everywhere ever since! Thanks Nana and Steve-o! :) He sure likes em!!!

What a fun day!! I love that last picture of him sleeping! He looks like one very content kiddo!!!

I just loved every minute at the Zoo with Gray ! What a fun time we had - he weas the most fun to watch out of all the creatures ! He was so awesome for such a little guy - he never fussed, never whined - he is such a fun and good little guy. LOVED it ! thanks for letting us go w/ you! LOVE YOU - the nana

Wow! That looks like a very fun day! The pictures are all way cute. It has been a while since I have been to the zoo but I think you hae inspired me. I will need to go soon.

Kids are always so facinated by the animals. I'm glad that Gray enjoyed his trip to the zoo.

What a fun day! Cute family!

You really are pretty funny. :) Twuuu wuvvv. haha!! I love Gray's asleep picture, he looks so so precious. Wouldn't that be funny if parents just let their kids go at the zoo? oh my