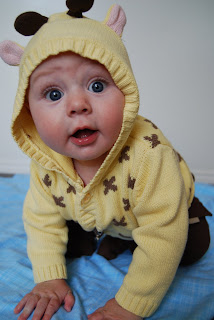 Wow, we've had a rough few weeks!! Sorry I haven't put up updates for a long time! Grayson got very sick for a while, and then *I* got sick, and Steve was in Boston for work -- so I was trying to take care of myself and the poor miserable screaming baby all by myself! So very much not fun!  Oh, and Steve-o reimaged my computer and it wouldn't let me post pics, so I didn't get much blogging done. Obviously. So here's the catch-up on all that has been going on in our lives!! :)
First of all -- the most exciting news -- I'm going to be an Auntie!!!  My sister Sarah is pregnant!!!!!!! -- due in April!! I'm so excited for her and Trent (her hubby) -- and I'm excited that Gray is going to have a cousin to play with!  He's the first baby on both sides of the family, so it's good Sarah is helping him out with this!! :) Congrats, you guys!!
The latest on baby Gray -- he is now 7 months old, weighs 20 lbs and is 29 inches long! He's a big  guy!  He can crawl, but prefers to  scoot forward a few 'steps' then lunge the rest of the way and stretch out on his belly.  Or better yet, he prefers to stand up and cruise around.  He can pull himself up and stand alone just holding on with one hand!!  He loves to 'talk' and is currently squealing/screeching loudly when he wants attention -- so much fum! He loves to say 'b' sounds -- and I kid you not, he says "ahgee" when he's hungry, "poooooop" when he has a dirty diaper,"uup" when he wants me to pick him up, "hi" or "hey" when he sees someone, and "mommommom" when he sees me. He also says "phhhhbbbbt" when he sees Steve -- his favorite game to play with Daddy -- blowing raspberries @ each other! He plays patty-cake with his Nana all by himself -- he gets so excited whenever he sees her and starts clapping enthusiastically! Steve also swears he says "Ollie" when he sees the dog, but I'm not sure about that one.  Gray is eating solids like a champ -- but still mainly breastfeeding still, which I love. His favorite solids are oatmeal, green beans, peaches & bananas. Doesn't care much for peas or pears. Oh, and he's the cutest darn baby ever. That about covers it!! Here are some new (at least new since the last post) pictures of the little stinker! Enjoy! 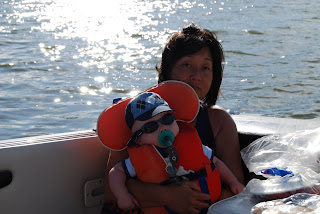 Steve's parents took us all out on their boat last month. It was Gray's first time out on the water. He was pretty indifferent about the whole thing. But he hated the life jacket. I thought it was cute! :) 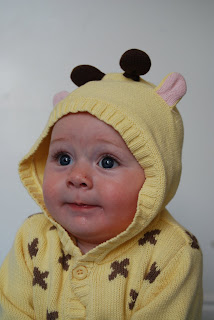 Grayson and his love for "B"s!!  I also love his giraffe sweater! It's what he's going to wear for Halloween! 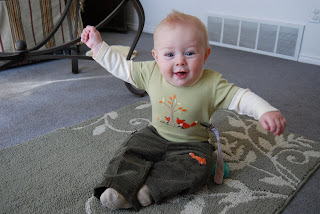 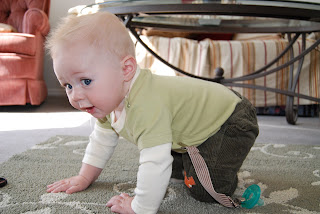 Crawling baby -- but looking sideways at me to make sure he's not going to get in trouble for it... 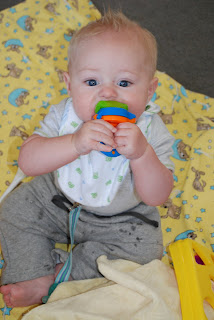 Lovin' him some peach! 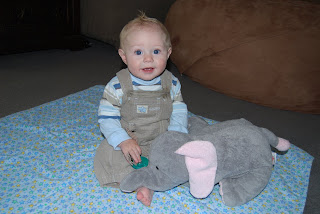 Gray and his cutest elephant! He loves this stuffed animal! Thanks, Nana! Oh, and if you look closely, his overalls have a little elephant on the patch. Too cute! 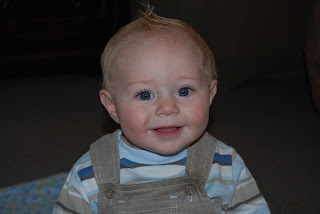 Just a cute close-up of my boy! 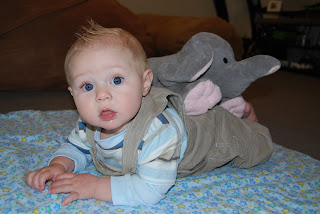 Again with the cuteness!  Look at those big blue eyes!!!

He is so cute!! I am way excited for Sarah, too!! How fun to have cousins.

Still the cutest boy ever. Hey if you'll let me, can I use some pics of him for my sweet Ruby stuff? And I am so excited for Sarah, our kids can finally be friends they will be a month apart, hopefully mine stays in that long.

Ohhhhhhh my goodness-- gosh!!! If my little baby is a fraction of that cuteness we will be happy. Every time I see new pictures of Gray I just squeal with joy. That was so cute on Sunday when he was playing and jabbering!!!

Sorry you guys have been sick, and without Steve. It always happens when they go out of town I swear. I'm glad you are feeling better!! Grayson is getting so big. He is so cute!!!

Those big eyes are so beautiful! He's a stinkin cute baby - I love that little girrafe sweater! It's definitely no fun to be sick on top of a sick baby - let us know if we can do anything to help!

You're little boy is sooo cute! And he's getting so big!

Might I add that your dad is right...Grayson is the cutest little thing. I love the baby blue eyes. He's gonna break some hearts!