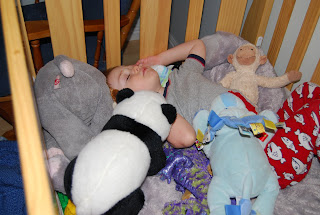 Steve and I have been trying to institute a new rule at naptime/bedtime: Gray can only have three toys in his crib with him. Otherwise, he'll sit there and ask for every single toy in his room, until there's no room in there for HIM (proof: the photo above)! So lately we've been telling him "You can have THREE toys, Grayson. 1,2,3!" and count as he names toys he wants. It's been working fairly well, with only the occasional tantrum. Today at naptime he got me laughing though. He asked for his first two toys (Thomas the train and Doc from Cars), and I said "Okay, you can have ONE more toy." He put his hand on his cheek, said "Uuuuuuuuuuummmmmmm"......... and had a look of intense concentration on his face, then suddenly smiled and exclaimed, "BLUE PANTS!!!!" and seriously made me get the navy shorts he wore yesterday out of the hamper. Then he just layed down and said "Ni-igh'" like he always does when he's ready for me to leave, and I left. Since when do 'blue pants' count as a toy?? And where does he come up with these things?????
Posted by Samantha at 4:17 PM

hahaha that is funny. Whatever makes them happy right?

Lol. I love this story. Kids may be hard work, but man are they funny!

That is just like his mommy! You always had to sleep w/ every stuffed creature you had ! No room in the bed for you ! or HIM I see ! teeheee - -