So I suppose I should document a bit more of what's been going on for the first trimester of this pregnancy :) I found out I was pregnant in the middle of May -- just with an at-home pregnancy test. I took it while Grayson was napping and Steve was at work, so I was alone when I found out -- I just smiled and cried and prayed to thank Heavenly Father for this little miracle! I told Steve by using his iPad (totally appropriate if you know what a technophile he is! :) hehe) -- There's an App by Pampers that tracks your pregnancy week by week, shows you what is going on developmentally, how big the baby is, etc. So here's a screenshot of what it looked like: 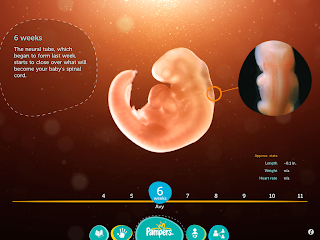 I handed that to Steve and said "This is how big your baby is!" -- he smiled, said "You're pregnant?!?!?" and kissed me. Then he said "We need a bigger car!" HAH! Such a male thing to say, don't you think?! (Also, as a side note: we bought a Toyota Highlander a few weeks ago because of this. So he's happy now! :) hehe)

Here's an ultrasound pic of the little seahorse: 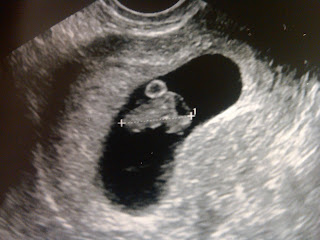 I say "little seahorse" because that's what Grayson called it when we showed him the picture :) I'm totally with him on that one! We're trying to "prepare" Grayson a little for the new arrival, but he doesn't seem to be able to quite grasp the concept. I tell him there's a baby in my tummy, and he laughs like it's the funniest thing he's ever heard -- like I just said I had a cow in my elbow or something. Maybe it'll make more sense when my belly gets big(ger). I'm totally open to suggestions here! What can I do to get him ready for a new baby? He's 2 1/2 now -- he'll almost be 3 when Baby is here.

Speaking of which, my official due date is January 17th, 2011 -- that sounds SO far away! I'm sure it'll be here before I know it, though! It's already seemed to go by a little faster than my first pregnancy. Probably because I'm busy chasing a 2 year old around!!! I think this time around is a little bit easier (in that I haven't actually thrown up -- just constantly queasy; plus, I'm not working 12-hour shifts at the hospital!), but also harder (that whole 2-year old thing, ya know). I'm completely EXHAUSTED all the time -- I feel so bad for Grayson -- I haven't taken him to do as many things as I should -- I just don't feel up to it! But hopefully now that I'm into my 2nd trimester, I'll be feeling better soon, and we can go explore more often!

The weirdest thing about this pregnancy is that I've been craving ground beef. Which I HATE. I usually won't eat ground beef unless it's an actual hamburger. But now I've been eating tacos and spaghetti with meat sauce, and anything else I can get with beef in it. SO weird. I've also been craving sweets (especially donuts and muffins) -- which is SO dangerous. With Grayson, I craved anything sour -- which doesn't really seem to be happening this time. Maybe this time we're having a girl???? :)

We are SO excited for this new little one, and can't wait to meet him/her!!
Posted by Samantha at 10:03 PM

I love that you told Steve by using the iPad. That is awesome.
I took my girls to my US appts so they could see the baby in my tummy. It made it more real when they were there watching the US rather than just showing them the recording on the TV.
Hope this pregnancy goes well for you.

Yay! I'm glad you've been feeling ok (at least not ralphing) I'm so excited for you guys. At this rate I'll never catch up to you! Maybe your kids can babysit mine ;)
P.S. Derek wants to see pictures of the new wheels :)

So fun, I am so happy for you! Bingham was too young to understand any of it, so I didn't even try, he barely turned 2 when Boen was born, so not sure, but I'm sure he will love the baby when he/she comes!

hehe!! Cow in your elbow.. :)
I'm excited I can come up next week and play with Grayson for you! You can just take a nice nap. yahhhh!
I would be so surprised if this little baby isn't a girl. I have a feeling too...!

Congrats!!! How exciting! I'd say since you're craving the opposite you're totally pregnant with a girl--that's my scientific conclusion.

Yay!! Congratulations, we are so excited for your family!! I totally know what you mean by cravings though, I don't really like meat either and ate a steak the other day, which I NEVER do!

That is so exciting! Congratulations to your whole family!

Pieces of Us said...

I'm so excited for you guys! Having 2 kids is sooo fun! I love it. Beckam didn't get the whole baby in my belly thing until my belly got big and was in his way {even then I'm sure he didn't realize there was an actual baby in there that was going to come out but whatever}. When I got really big he would talk to the baby and kiss my belly. I loved it.

Congratulations! That is so exciting!! I am sure Gray will adjust it might just take some time, but I am sure he will be a great big brother.

I am so happy for you. Hopefully this pregnancy won't be so hard on you. You looked great when we saw you on the 4th.

Congrats! We are so excited for you-hopefully you're feeling better and not so tired...We need to get our little (and big) guys together when you're feeling up to it!

Congratulations!!! Thank goodness for blogs!! I am so glad to find out that I too think like a 2 year old. I always think they look like seahorses and the ultrasound tec. always looks at me like I am crazy. Sorry they do not really look like a peanut. This is awesome! are you guys finding out what it is? let us know if you do. :)