What's Been Going On Lately

Wow, I haven't blogged for a while! We've been really busy, but I haven't been taking any pictures -- I'm a bad momma. I do have one pic -- of Grayson licking his first beater from when I made cupcakes. It was hilarious -- he LOVED it -- kept saying "YUMMMM!" and "more, peeease" -- he really is my son. So here's the one picture I have: 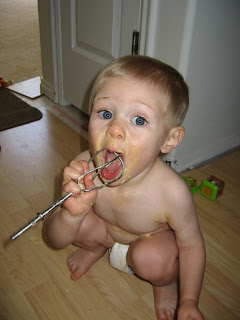 So here's what else has been going on lately, besides awesome cake batter. Last weekend, we went to the Barkers' cabin at Bear Lake (thanks again, guys! It was so fun!), but it was really cold, so we didn't actually go out on the lake, or even to the beach. Maybe next time. But Gray had fun playing with Jackson and Brylee :)
Then, on Monday, we went the the Treehouse with my mom, Sarah, and Rowan for Toddler Time. Gray was in HEAVEN. Ohh my goodness!! He didn't want to leave! That place is so fun! There is SO much to do there! I don't think we even explored half of it! My mom bought Gray a membership there, so we're going to be going all the time now :)
Then on Monday night we had a BBQ with the Tribes and Speechlys -- so much fun to get everyone together!
On Wednesday, we went to Cherry Hill with my family. Grayson had a blast again! He LOVED the kiddie pool part. He'd hold your hand and make you run all over in the water! And he liked the little slide, as long as someone went down with him. He didn't like it so much when Steve tried to send him down alone. Poor little guy screamed so loud! But he enjoyed everything else! He liked the lazy river too -- nice to relax and chill for a minute :).
Friday, we went to the library and picked out some new books for Gray, and got an Elmo DVD and CD, too. Fun stuff. He was most interested in the rugs on the floor, and trying to pull as many books off the shelves as he could. Fun for all.
Then today (Saturday) we went to the Dinosaur Park! I DID take pictures of this outing, but for some reason my computer isn't uploading them -- I'll post them when I figure it out. Thanks Mom and Dad for going with us! It was a free day at the park, so there were lots of people there, but it wasn't too bad. Gray was amazed by the dinosaurs -- he kept saying "WOW!" or "WHOA!" or "BIG!" or "REALLY BIG!!!" It was so funny to watch him! He also had a great time running and running and running! And he loved the hand rails, for some reason. :) Such a funny kid.
So we've had such a busy week! So fun!!!
Posted by Samantha at 9:19 PM

such a fun time w/ our Grayson and Wayments ! I had a blast - poppa said we could probably go to the dump with Grayson and have "the best time" - He is so very entertaining no matter where we are ! Loved it all - thanks for going with us - or including us on your adventures ! LOVE YOU , nan