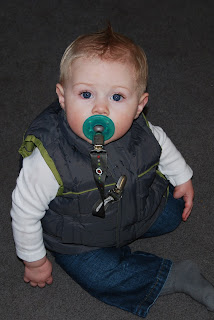 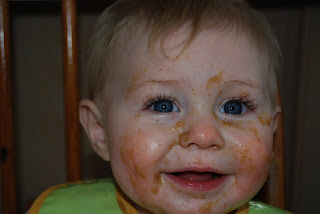 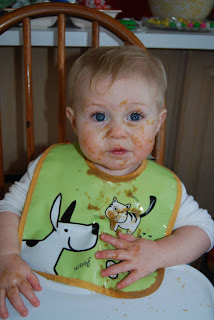 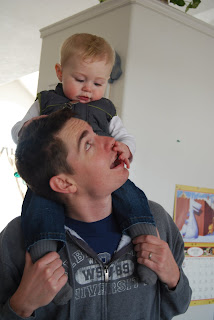 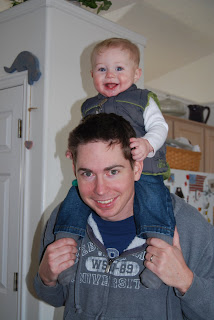 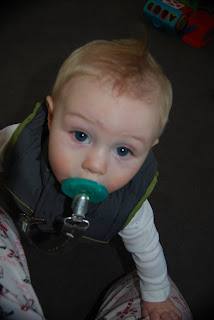 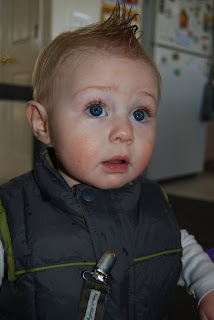 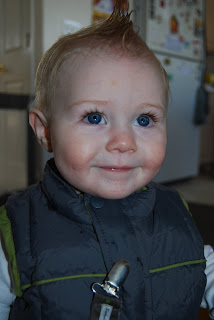 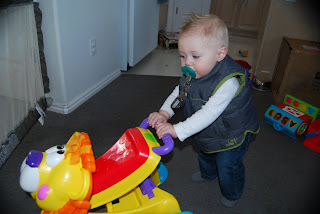 Gray is getting so big! He is now 10 1/2 months old! Oh my goodness! He is 22 lbs, and 30.5 inches tall! He is really good at standing by himself, and he's already taken his first steps! He's not quite walking yet, but he can go so fast walking behind his lion walker toy! He loves that thing -- just laughs and giggles the whole time while he goes! He's close to walking though -- he just keeps trying and trying, so he'll get it soon, I'm sure! :) He goes up and down the stairs as much as he can -- that's a fun little game for him. He's such a little adventurer -- always getting into something new! :) He loves to feed himself -- though he makes quite a mess, as you can see! He enjoys it, though -- so I let him have fun! What's a little mess, when you get such big smiles and giggles out of it!! He's making good use of all his teeth -- he has his two bottom, his two top are 1/2-way in, and he's working on the incisors next to the top front teeth, too! His adorable smile is just going to get cuter and cuter! :) Grayson's new words include "ah-boo" (peek-a-boo), "bee-bee" (binki), "Babana" (banana), "WOOF!" (when he sees the dog, or hears him bark). He's starting to say "book" sometimes -- but mostly it just sounds like "uk" or "buhhh". He also says "HEY!" and "HI!"! He understands what "NO!" and "Come here!" mean, as well as "Where's Daddy?" and "Where's Momma?". Gray loves to sit with one leg in front of him, and one leg bent behind him (like the first picture) -- or he kneels down on one knee! Silly guy! He enjoys watching Sesame Street, and a free Fisher-Price DVD we got with one of his toys! His favorite games are peek-a-boo, horsey rides on my lap, riding on Daddy's or Poppa's shoulders, chasing the dog/trying to steal the dog's toys, and walking with his lion. He's getting to be such a BOY instead of a baby! It makes me a little sad, I have to say!! But it is SO fun to watch him grow, explore, and discover! :D
Posted by Samantha at 10:22 PM

What a cutie! Time really does fly. It seems like yesterday that I saw you at Costco and you were walking and walking trying to go into labor..and now your baby is almost 1!!!! Crazy! He really is so darling.

He is so cute. Where did he get his blonde hair from? My kids are blonde too and we are both dark so who knows. Time for another baby? Glad things are going well.

Oh my ! I love all those pics ! OH I just LOVE LOVE LOVE LOVE my baby Gray ! What a great mommy and daddy he has TOO ! such fun times.

You sure do have some cute boys there!!

Grayson is seriously one of the cutest babies I have EVER seen. He is such a handsome man.

Gray is seriously one of the cutest babies I have EVER seen. He is such a handsome man.

Oh, how I love Sesame Street. He is such a cutie and is growing too fast!

It just keeps getting better and better - I love how as moms we get to watch them explore and find new things and see how they grow - so fun!

What a cute little guy!